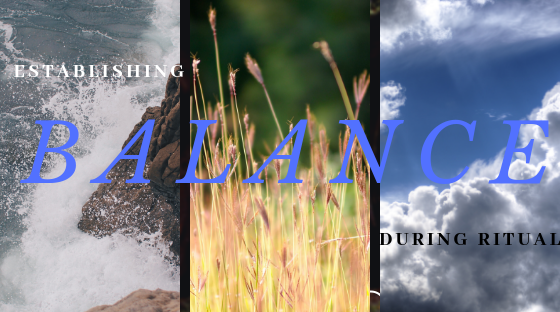 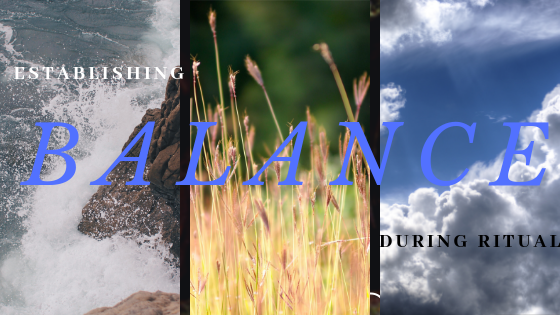 You Must Have Balance

Ever since I started learning witchcraft, just about every book I’ve read has emphasized the importance of balance. You must have balance for your workings to be successful. I agree with this, but as I’ve spent time actually doing the work, I’ve learned a thing or two that wasn’t in books- wasn’t in articles online.

This push for balance comes from the Hermetic Principles, which are outlined in The Kybalion. The Fourth Principle, the Principle of Polarity, states:

Everything is dual; everything has poles; everything has its’ pair of opposites; like and unlike are the same; opposites are identical in nature, but different in degree; extremes meet; all truths are but half-truths; all paradoxes may be reconciled.

Wiccans have drawn many of their ways from this little book. When they applied this Principle, they also apply it to the Deities. You must invoke the God and the Goddess, you must have a Matron and Patron deity. This implies that the God and Goddess – no matter which ones – are polar opposites and that you need both to learn the ‘truths’. Hmm…nope. Don’t think so, sorry! I’m sure this principle applies to other things, but I don’t think it can be applied to humans based on gender.

I started writing this blog Saturday night, after having an epiphany. ButI knew it wouldn’t be a very good article if I just shared my discovery without doing a little background research. One of the books I went to was Silver Ravenwolf’s To Ride a Silver Broomstick. Now, I like Ravenwolf as an author – she’s a good writer. But I don’t like how she states her believes as dogma – I wouldn’t like that even if I believed what she does, but I really don’t like it because she has very different beliefs from me. For example, she states that deities exist to help humans.  I was talking with a friend (who happens to be an amazing author) about this and she said that Ravenwolf’s point of view is that “humans ate the center of the universe”. (literally laughed out loud at this). But I digress… the point is she and many other authors hold this believe that male and female deities represent certain things and they both must be  present in order to bring a balance of power to the ritual. I haven’t been practicing as long as Ravenwolf or any other author that makes this claim, but I’ve learned from experience that the deities are all very different from one another, and some deities possess qualities that are said to belong only to the opposite sex. So I decided to try something different. 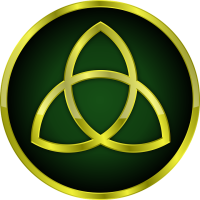 I created a talisman for my bedroom, and as I was setting up my altar, something in me said to call upon the three deities that have the most presence in my life: the Morrigan, the Cailleach, and Lugh. I affectionately call them “the Three”. I thought about what they represent, most prominently anyways, and I thought of the elements.  Not the four elements of traditional witchcraft but the elements as the Celts saw it: Land, Sea, and sky. So I arranged the candles I have dedicated to each deity in a triangle. I raised my hands in goddess position and called the Morrigan and asked her to bring the power of land – the strength of stone and stability of trees. I called to Cailleach and asked her to bring with her crashing waves of wisdom, and then asked Lugh come to my circle as rays of light come in through my window in the early morning hours. And it was incredible. The Morrigan came on a mist and rose like the standing stones she used to stop a retreating army once. Cailleach came in on a crashing wave –  I could almost smell the salt and felt that unique chill you get when you stand on a beach. When Lugh came in I felt the gentle warmth of the sun and I could feel the flames of passion spark inside me as if gas was poured onto the fire. I said the words and gave the offerings. I left the talisman on the altar to scribble down everything I said and did, as it was impromptu and I didn’t want to forget what I said or what I felt. A few minutes later I returned to my altar, thanked the Three, and bid them farewell. When I went to pick up the talisman- I shit you not it was vibrating with power. I could feel the energy buzzing from it when my hand was about an inch away from it. Even though it may seem like it’s not a big deal, it was one of the freakiest and most amazing things I have ever experienced. After I hung it on my wall I pulled out my computer and started this article to share my story. I suggest giving it a try – instead of routinely calling a god and goddess, really think about the deities you work with and think about their personalities, the lessons they teach, the elements they favor and call on them based on those qualities. That would create true balance. If you don’t like it, then no harm done, right? But you could have an incredible ritual because of it, so just try it out.

I’m a writer, witch, artist and mother. I have expanded my writing career, graduating from contributing to content sites like Hubpages, to blogging, to magazine columnist, and now I’m working on books! View all posts by amandawilsonwitchwriter